Coming in February 2022: “Exploring Our Forgotten Past: Fort San Juan,” an exhibition created by the Exploring Joara Foundation.

Opening the Door to Change presents the history of education in Western North Carolina, with a particular emphasis on Madison County, from the mid-nineteenth century through the late twentieth. Here, learning has taken many forms, from in-home instruction, common, subscription, and religious schools, to colleges of farming and craft. The curriculum of these schools, as well as their very construction, and in some cases closing, was deeply entwined with the changing needs and values of the Western North Carolina Appalachian community.

The exhibition focuses on the dynamic relationship between community values and education, with a special focus on how students and their families navigated the economic, geographic, and racial challenges to education. Trends and changes in curriculum, assessment, and classroom design will also be explored.

The virtual exhibition will feature didactic panels showcasing a survey of schools within Madison County and highlighting the effect community values had on the curriculum, function, and format of these institutions. Online visitors may also get a sneak-peak at an original film, produced by the Museum, presenting the oral histories of several Madison County residents sharing their personal recollections and memories of past school-days.

This virtual exhibition is sponsored by the Madison County Tourism and Development Authority.

ELEMENTS OF HAND AND MIND: A Selection of Historic Southern Highland Crafts From the Collections of the Rural Heritage Museum

Elements of Hand and Mind presents a historical look at handicrafts made in the Southern Highlands, with a special focus on the artists of the late nineteenth and early twentieth centuries. The men and women who created these objects were part of the Southern Appalachian craft revival; through their work they helped to maintain the longstanding mountain traditions of self-reliance and quality craftsmanship, while simultaneously navigating a growing market and expanding design possibilities. The handicrafts presented in this exhibition are selected from the Rural Heritage Museum’s permanent collection and feature exemplary works by George Donkel, Shadrach Mace, Reverend Benjamin Davis, and Rodney H. Leftwich, among others.

“While good craftsmanship will always be a prime factor in any handicraft, there are other considerations which determine its acceptability. The utility of the object is one of the first tests; then comes the choice of material, the color, form, and texture, all of which combine to give pleasure and satisfaction to maker and to user. These elements of hand and mind, whether represented in the simplest objects of the home or in the choicest possessions of a museum, are indeed expressions of true culture.1”

A Fountain of Youth in the Southern Highlands: A History of Hot Springs, North Carolina 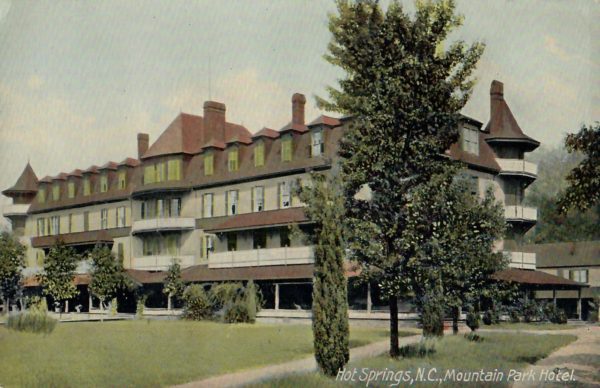 The Rural Heritage Museum of Mars Hill University has announced it will present a new exhibition, entitled: A Fountain of Youth in the Southern Highlands: A History of Hot Springs, North Carolina, beginning February 3 through August 31, 2019.

According to lore and newspaper writings, there was a time when the hot, naturally carbonated waters that bubbled out of the earth beneath Hot Springs, North Carolina, were regarded as “a fountain of youth; the universal solvent; the elixir of life; the certain panacea for all the ills to which the flesh is heir….”1 During the 18th and 19th centuries, the springs and their supposed restorative powers drew tourists from all over the world to this tiny mountain town in Madison County. This exhibition explores the unique and colorful history of Hot Springs. Included in the exhibit are rare and newly discovered documents, photographs, and artifacts, on loan from public and private collections from throughout the region. Among them are original menus, newspaper advertisements, tea pots, and soup tureens from the historic Mountain Park Hotel, a vest worn by the first mayor of Hot Springs, various Dorland–Bell School ephemera, crafts made in 1916 by WWI interned Germans, and many other unique objects from Hot Springs’ historic past. The exhibition follows the complex history of the town and the surrounding region from the Ani-Kituah and Cherokee peoples, to European settlers, and on to Edwardian-era aristocrats. Also explored is the impact of the railroad, logging, agriculture, the French Broad River and its historic 1916 flood, the Civil War, World War I (and the confinement of 2700 “enemy aliens”), the Civilian Conservation Corps, the Dorland-Bell School, mountain music, the creation of the Pisgah National Forest and the Appalachian Trail, and the rise of contemporary eco-tourism.
1. The Commonwealth (Scotland Neck, North Carolina). January 25, 1883. P.1

This exhibition is made possible through a grant from the Madison County Tourism and Development Authority.

A Cabinet of Curiosities: Selections From the Permanent Collection

The Rural Heritage Museum of Mars Hill University has announced it will present a new exhibition, entitled: A Cabinet of Curiousity: Selections From the Permanent Collection, through December 30, 2018. This exhibition presents a selection of late 19th century objects once used by Appalachian homesteaders in Western North Carolina. Objects on display include spinning wheels, looms, a variety of farm tools, hand-wrought objects for household use, silver, a pump organ, and other unique objects of cultural heritage donated or purchased by the museum over the past 40 years.

Also included will be informational panels to enlighten visitors, including some that speak about the history and function of museums in society. A short video, entitled Museums Do That?, will be on view. Produced by the American Alliance of Museums, the video examines the important role of the museum as an indispensable resource in contemporary education.

Understanding Our Past, Shaping Our Future.

The Rural Heritage Museum at Mars Hill University opened a new exhibition, “Understanding Our Past, Shaping Our Future.” This interactive exhibition, based on Cherokee language and culture, employs sound recordings as the basis for presenting a coherent Cherokee story in words, text, and artifacts. The exhibit runs through May 27. Museum hours are Tuesday through Sunday, 11:00 a.m. until 5:00 p.m. Admission is free.

Understanding Our Past, Shaping Our Future was developed with Cherokee community input with the assumption that language shapes thinking. In creating the exhibit storyline, the project team used the Cherokee language to reflect inherent Cherokee values.

This exhibition is funded by the Institute of Museum and Library Services, an independent federal agency, through a grant to the Eastern Band of the Cherokee Indians.

The Civil War in the Southern Highlands: A Human Perspective

The Rural Heritage Museum at Mars Hill University opens a new exhibition, “The Civil War In the Southern Highlands: A Human Perspective,” beginning August 19, 2017, and running through March 4, 2018. This exhibition presents an account, using rare original letters and newly-discovered documents, of the personal struggles of the people living in Madison County and the Southern Appalachian Mountains during the middle of the 19th century. The museum is open daily (except Mondays) from 11:00 a.m. to 5:00 p.m., and by appointment. It is located in Montague Hall on the university campus. Admission is free.

The exhibition includes dozens of photographs and authentic objects from the period, including a wedding dress, a jacket worn by James A. Keith, a doctor and lieutenant colonel in the Confederate Army; Confederate currency; flags; books; sabers; ammunition; a McClellan cavalry saddle; and many other objects of everyday life owned by individuals on both sides of the war.

Part of the exhibit explores the “Shelton Laurel Massacre,” an event in January 1863 in which Confederate soldiers under the direction of Lt. Col. Keith summarily arrested and executed 13 prisoners in the remote Shelton Laurel valley of Madison County. That event drove a deep wound into the rural communities of Madison County that lingers to this day. Exhibit organizers say that, in many ways, the events in Shelton Laurel in 1863 have become emblematic of the Civil War as fought in the mountains: confused and complicated, often conducted outside the rules of war by individuals with changeable loyalties, looking only to survive. The resulting consequences were often brutal for the women, children, and former African-American slaves left to tend to the homes and farms left behind.

Exhibit organizers say they’re not picking sides or casting blame, but rather presenting viewers with the facts as they best know them. The exhibit is “an attempt to shed light on the complex, apocryphal nature of the conflict in the devastated Southern Highlands, which still reverberates deep in the hollows and gaps of the Blue Ridge,” according to museum director Les Reker.

The exhibition was curated by Max Hunt, senior writer for the Mountain Xpress newspaper, along with historian Katherine Cutshall and authors Maynard Shelton and Dan Slagle. Editing, writing, research, and design was provided by Carolyn Comeau and Ryan Phillips.

This exhibition is made possible through a grant from the Madison County Tourism and Development Authority.

Shelter on the Mountain: Barns and Building Traditions of the Southern Highlands

Even though this video demonstrates cabin construction in Finland, most all of the techniques and tools used are the same ones used by the American settlers in the early 19th century. The Scotch Irish, the Germans, Dutch, English and other nationalities. In our current exhibition “Shelter on the Mountain: Barns and the Building Traditions of the Southern Highlands” we have on display several of the tools used in this video, the broad axe, the T-Handled Auger ( hand drill ), the draw knife and many others. View the video. 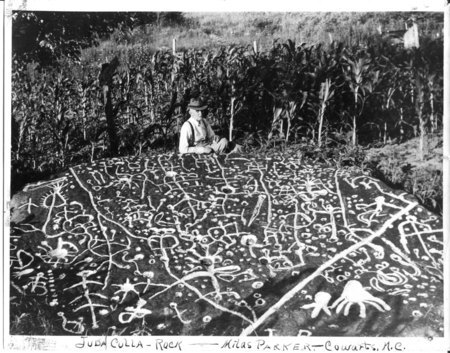 Some of the earliest structures built in Western North Carolina, Madison and surrounding Counties were those constructed by the Ani Kituwah indians, ancestors of what we now know are the Cherokee. Pictographs dating back to the Mississippian Period are found on Paint Rock. These pictographs have survived two centuries of vandalism and natural weathering. Judaculla Rock near Cullowhee,NC, is a flat rock carved with various abstract forms thought to date from the Middle Woodland ( 1000 – 1500 CE ) to late Mississippian Periods. According to Cherokee oral tradition, the carvings are scratches made by Judaculla or Tsul ‘kalu, the slant-eyed “Master-of-Game” giant, while he jumped from his farm on the mountain to the creek below. If you would like to know more about Judaculla Rock watch the following short episode of UNC-TVs “My Home – NC” that aired.

The Rural Heritage Museum is part of:

The museum is closed for the fall semester. Please watch this website and our Facebook page for announcements about the spring schedule.