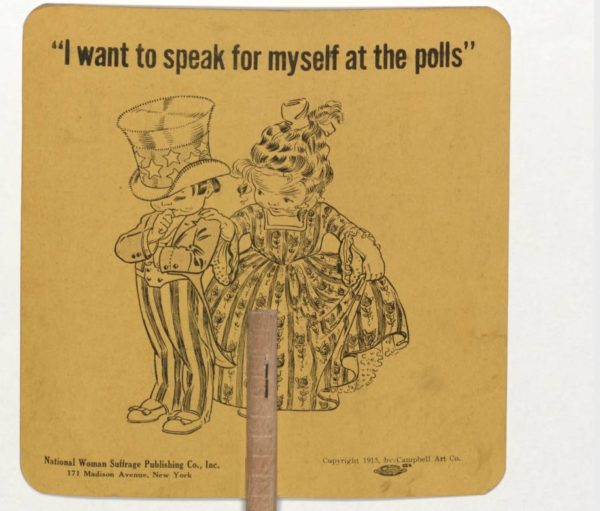 Courtesy of the State Archives of North Carolina.

The Liston B. Ramsey Center for Appalachian Studies at Mars Hill University will host an exhibit of documents pertaining to women’s suffrage from the State Archives. The exhibit, on November 6, 2019, from 3:30 to 8 p.m., is part of the “She Changed the World” campaign from the North Carolina Department of Natural and Cultural Resources. It’s the first in a series of events across the state to exhibit these documents and artifacts in celebration of the 100th anniversary of women gaining the right to vote under the 19th Amendment.

Some of the earliest efforts to win the vote for North Carolina women began in the western part of the state. In 1894, the North Carolina Equal Suffrage Association began in Asheville, and Yancey County Senator J.L. Hyatt introduced a bill to enact women’s suffrage in North Carolina in 1897. That bill wound up in the Committee on Insane Asylums, and it was several years before efforts for women’s suffrage began again. In 1915 an Asheville woman, Lilian Exum Clement, pushed for a constitutional amendment to give women the right to vote, and Congress passed such an amendment in August 1919, then sent it to the states for approval. Tennessee, the 36th and final state needed for ratification, passed the 19th Amendment in August 1920. North Carolina did not endorse the amendment until 1971.

State Archives documents that tell this rich and contested history of women gaining the right to vote will be on display in the Ramsey Center from 3:30 to 8 p.m. A program at 6 p.m. will feature speakers on the State Archives treasures; efforts of Western North Carolina women to win the vote; and the tradition of Election Cakes. Interpretive panels and hands-on activities such as crafts and voter registration will complement the display of items from the State Archives vault. The Madison County League of Women Voters and members of the ERA-NC Alliance will be on hand to share information about their organizations’ work for voting rights and opposition to sex-based discrimination under the law.

A team from the North Carolina Department of Natural and Cultural Resources, including State Archivist Sarah Koonts, will share the documents and lead activities with area students in the morning and early afternoon. Some of the items that will be on display are:

Other items in the exhibit reflect the popular culture and political sentiments in both the pro- and anti-suffrage camps. These include letters and flyers promoting the causes, as well as items such as fans with political messages on them.

The evening event will feature:

To learn more about the Mars Hill University event, please go to https://www.mhu.edu/event/she-changed-the-world-100th-anniversary-of-womens-suffrage/ or contact Karen Paar at (828) 689-1262 or kpaar@mhu.edu. To see a schedule for the “She Changed the World” events and to learn more about this campaign and North Carolina women making history, go to https://www.ncdcr.gov/about/featured-programs/she-changed-world-north-carolina-women-breaking-barriers.

The Liston B. Ramsey Center for Appalachian Studies is located inside Renfro Library on the Mars Hill University campus. Admission is free.