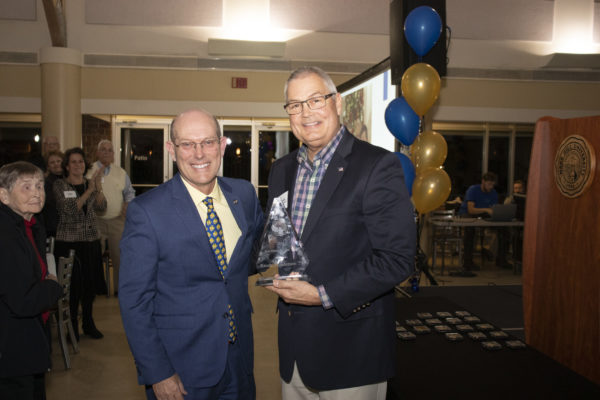 Mars Hill University has named Randall “Randy” Henderson Jr. of Fort Myers, Fla., as Alumnus of the Year for 2019. Henderson, a member and class president of the MHU class of 1979, was honored at half-time of the university’s homecoming football game on October 19.

Henderson, a native of Asheboro, N.C., serves as the Mayor of the City of Fort Myers in Lee County. He is also the CEO of Corbin Henderson Company, a real estate firm in Fort Myers. He has been a resident of Fort Myers for 40 years, where he has had a lengthy career in banking. He has also spent nearly 20 years as a public servant in Fort Myers, having served as a city council member for nine years and now serving his third term as mayor.

In addition to his role as a public servant and a business leader, Henderson is an active community volunteer, currently serving as an advisory board member for Keiser University, the Edison Pageant of Lights, and The Salvation Army. He is a past president of the Greater Fort Myers Chamber of Commerce and Fort Myers Kiwanis Club and previously served as chairman of the City of Fort Myers Conference and Convention Council. In 2015 Randy was named president of the Florida League of Mayors at the organization’s annual business meeting and served 2015-2016.

A private pilot, Henderson enjoys flying both for business and personal pleasure and is an avid fisherman. He and his wife Ginny, who is also a member of the MHU class of 1979, have been married for 40 years and have three adult children, a daughter-in-law, a son-in-law, and two granddaughters.

Each year during homecoming festivities, Mars Hill University recognizes one or more alumni of the year who have distinguished themselves in various ways. Criteria considered for the award are: commitment to their alma mater, service to others, leadership in the church or performance in the professional world.