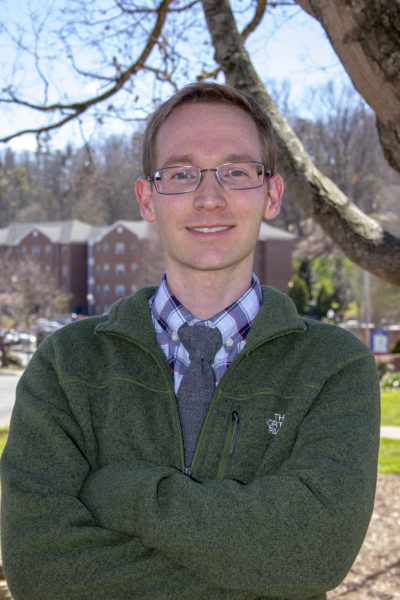 Researchers worldwide are currently engaged in a race against time with life and death implications for many of the world’s people. Their aim is to defeat or at least stem the tide against a tiny but powerful enemy, SARS-CoV-2, the virus which causes COVID-19.

Jeddidiah W.D. Griffin, assistant professor of biology at Mars Hill University, has joined that fight with research which he hopes will provide a starting point for researchers who are developing drug therapies against the virus.

According to Griffin, the complicated name of the research article belies a relatively simple concept: to identify how the structure of the enzyme which enables the COVID-19 virus to reproduce changes when inhibited.

That knowledge, then, becomes the building block for treatments against the disease.

The structure and replication process of SARS-CoV-2 is similar in some respects to SARS-CoV, the virus which emerged in Asia in 2003 and caused severe acute respiratory syndrome (SARS). The same protein, he said, enables both viruses to reproduce.

Griffin said he used a branch of mathematics called graph theory to identify the parts of the protein which maintain the network of amino acid interactions which, in turn, may keep the protein molecule working. The goal of the research was to investigate how networks in working proteins differ from inhibited proteins.

“Imagine crumpling up a strip of paper. In the crumpled paper, some parts of the strip will touch other parts of the strip, forming a network of interactions,” Griffin said. “This is like a string of amino acid residues that fold up into a protein. In my research, I use computers to make sense of the connections within a protein, much like drawing a map of all the connections within the imagined crumpled strip of paper.”

Griffin’s research conclusions identified several “residue network clusters” in the protein which may disrupt the protein connections if changed. Other researchers then, may use those vulnerable connections as a starting point in the development of therapeutic drugs which target the virus.