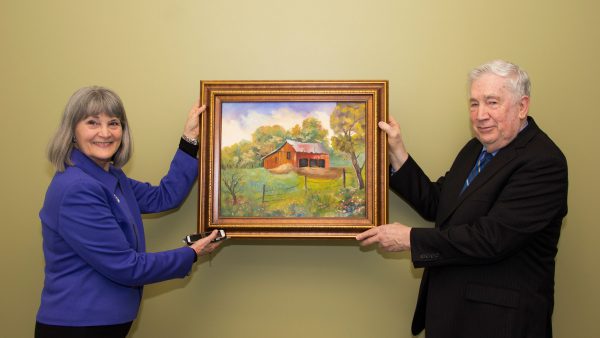 Cathy Franklin-Griffin, dean of the Judge-McRae School of Nursing, and Professor Emeritus John Hough, hold a painting by Hough’s late wife, Beverly, which will hang in the break room of the Ferguson Health Sciences Center at Mars Hill University.

Mars Hill University nursing students will have a brighter break room in which to relax between classes, thanks to a donation from a retired Mars Hill professor. John Hough, who taught in the education program from 1962-1984, and again from 1994 until his retirement in 1998, donated a painting made by his late wife, Beverly. The painting, of a barn located near the university campus, will hang in the break room on the third floor of the Ferguson Health Sciences Center.

Beverly Hough spent much of her career as an educator, teaching in the public schools of North Carolina and at several colleges, including Mars Hill. After retirement, she threw herself into her artwork, creating numerous paintings, many of them of the barns in and around Madison County. She passed away in October 2010.