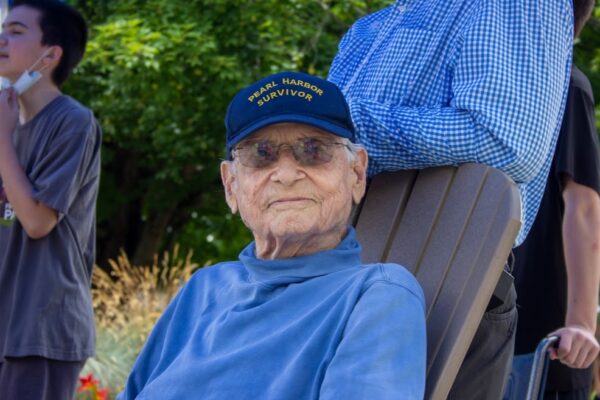 Dr. Harley Jolley, who taught history at Mars Hill University for over 40 years in addition to being a veteran, a Pearl Harbor survivor, an author, a national park historian and interpretive ranger, and a frequently-interviewed subject matter expert on the Blue Ridge Parkway and the 1930s-era Civilian Conservation Corps program, passed away quietly at his home in Mars Hill today.

Jolley was a well-loved professor of history at MHU from 1949 to 1991, and was well known for bringing the stories of history alive in his classroom with his trademark vivid descriptions and sound effects. He and his wife, Betty Jolley, who passed away in 2007, formed the backbone of MHU history department for approximately four decades.

As he taught about World War II, Jolley was able to relay personal stories from his experiences as a veteran of both the European and Pacific Theaters and a survivor of the Pearl Harbor bombing. He gave numerous interviews through the years in both news stories and documentaries about his experiences during the “Day of Infamy.” In 2016, he went back to Pearl Harbor with his family, for the 75th anniversary commemoration of the bombing that drew the United States into World War II. It was the first time since 1941 that Jolley had returned to Pearl Harbor.

Jolley also served as a member of the Civilian Conservation Corps in North Carolina in the 1930s, a federal program which served to lift the very poor from poverty during the Great Depression, and also built schools, bridges, dams, and other public works all over the U.S. In 2007, Jolley researched and wrote a book about the corps, called That Magnificent Army of Youth and Peace: The Civilian Conservation Corps in North Carolina, 1933-1942.

In addition to his teaching career, he spent 25 years as a seasonal ranger and historian with the interpretive division of the U.S. Park Service, on the Blue Ridge Parkway. He authored ten books and publications which chronicle the history of the Parkway, including the often-referenced pictorial history, The Blue Ridge Parkway: The First 50 Years. Through the years, he gave numerous interviews as a recognized expert on the history and creation of the Parkway.

He also was a member and Sunday School teacher at Mars Hill Baptist Church for many years.

He received the Order of the Long Leaf Pine in 2008.

Earlier this summer, the Mars Hill University community and the town of Mars Hill celebrated Jolley’s 100th birthday with a birthday parade. Numerous former students and colleagues drove down College Street to call out birthday greetings and wave posters. On the same day, Mars Hill Mayor John Chandler presented Jolley with the key to Mars Hill, and issued a proclamation naming July 5 as “Harley Jolley Day” in the town.

The Jolley family plans a small family funeral for now. A celebration of life for the Mars Hill community will be planned at a later date.