Our latest Mountain Mover is a familiar face on the Mars Hill University campus and in the community. We talked to Zach Benton on the day after World Down Syndrome Day about his experiences working at the university. 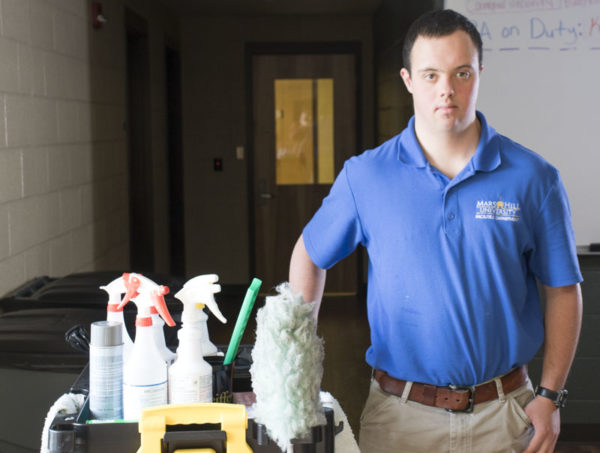 Zach Benton, on the job in Laurel Residence Hall at Mars Hill University.

After attending college at Western Carolina University, Zach Benton got a job bagging groceries at Ingle’s that allowed him to get his own apartment. Now-retired Mars Hill town manager Darhyl Boone connected him with the university when a position opened up in Pittman Dining Hall. Growing up in Mars Hill, Zach says he’s always wanted to work here. “I wanted to work at Mars Hill University because it felt like home to me,” Zach says.

Not long after taking that first campus job in food service, Zach moved to the facilities department with a job as a housekeeper. He’s been assigned to Wren Student Union and Chambers Gymnasium, and now serves as the housekeeper for Laurel and Dogwood residence halls.

Zach was able to attend Western Carolina thanks to a scholarship from Ruby’s Rainbow. The nonprofit, based in Austin, Texas, has a mission “to grant scholarships to adults with Down syndrome who are seeking post-secondary education, enrichment or vocational classes, helping them achieve their dreams of higher education while spreading awareness of their capabilities and general awesomeness.”

At Western, Zach went through the University Participant (UP) Program. It’s an inclusive, two-year, on-campus living and learning experience for college-aged persons with intellectual disabilities. UP students live in the university residence halls with other students and take the same classes as other WCU students. Zach is one of the program’s success stories, completing the program’s requirements in personal development skills, community participation skills, vocational preparation skills, social participation and learning, and course auditing. He graduated with his UP Certificate of Accomplishment in 2015.

“It set me up to gain independence,” Zach says of his WCU experience. “When I came here I was excited about this job and able to have a good time and see what it’s like.”

Ruby’s Rainbow founder Liz Platcha keeps in touch with Zach, posting updates to the organization’s supporters as he achieves new dreams: graduating the college program, getting a job and apartment, earning belts in karate, running his first half-marathon. Zach now is on the Ruby’s Rainbow advisory board. 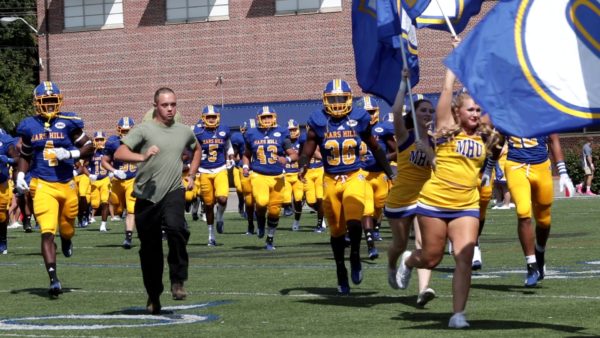 Zach Benton leads the Mars Hill University football team onto the field for a home game in Meares Stadium.

When football season rolls around again this fall at Mars Hill, it’ll be easy to spot Zach at the home games at Meares Stadium. He’ll be the guy in his street clothes, leading the team as they run onto the field behind the cheerleaders. “I started doing it because I wanted everybody to feel the pride in the stadium,” he says. “I come out and then the football players, who are just like family to me. They play hard and do a good job.”

Ruby’s Rainbow recently caught up with Zach here at MHU in this video: