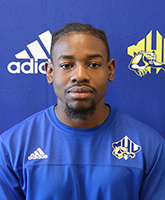 “We are honored to be able to award two postgraduate scholarships for minority student-athletes to assist these amazing individuals in furthering their education,” said SAC Commissioner Patrick Britz. “The SAC has a tradition of making a commitment to diversity and inclusion and being able to honor and reward the hard work and dedication that these student-athletes have put in on the court, as well as in the classroom is very exciting.”

“We are thrilled to be able to support these outstanding student-athletes as they further their education,” said Dan Nunnery, Senior Vice President of McGriff Insurance. “We are committed to supporting the SAC and all of its student-athletes.”

Rojas, a senior from Leesburg, Fla., was a defensive specialist on the Pioneer volleyball team. She played in 58 matches during her career, recording 24 kills, 877 assists, 474 digs, and 26 service aces.

“I am beyond grateful to the selection committee for being named the recipient of this scholarship,” Rojas said. “I want to thank my parents, professors, coaches, and staff, as they helped make this possible.”

A three-time SAC Commissioner’s Honor Roll selection and Dean’s List honoree, Rojas graduated with 3.87 GPA in biology, while minoring in chemistry. Upon completion of her undergraduate degree at Tusculum, Rojas plans to attend medical school with the goal of obtaining her Doctor of Medicine degree.

“Alyssa was always able to balance and excel in her academics, athletics, and university obligations throughout her time here,” said Tusculum head women’s volleyball coach Danielle Marante. “I am happy for Alyssa that she is now being recognized for her academic achievements and is more than deserving of this scholarship.”

My family and I wish to express our sincerest thanks to the SAC for awarding me the South Atlantic Conference Minority Postgraduate Scholarship,” said Trim. “This scholarship would aid me in my pursuit of a doctoral degree in physical therapy which I plan to use to work with athletes like myself in the future.”

An integrated health science major, he posted a 3.72 GPA, and upon graduation plans on attending medical school to pursue a Doctor of Physical Therapy degree.

According to Mars Hill Director of Athletics Rick Baker, “Kyrel is most deserving of the South Atlantic Conference Minority Postgraduate Scholarship. He is a very well-rounded student-athlete, who serves MHU as a tutor to other students, Supplementary Instructor, Lab Assistant, Dean’s List awardee, and is also very involved with Mars Hill’s Student-Athlete Advisory Committee. On top of being a solid tennis player for the Lions, Kyrel always found time for community service. Kyrel truly leads by example.”

The McGriff Insurance Services Minority Postgraduate Scholarships are awarded to SAC minority student-athletes who excel academically and athletically and have completed their final year of intercollegiate athletics competition. Both Rojas and Trim will receive a one-time, non-renewable scholarship of $2,000 toward the graduate school of their choice.