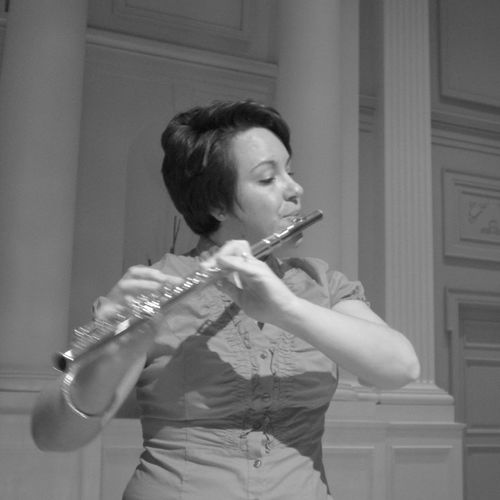 Misty Theisen received degrees from the University of Southern Mississippi in Music Education (B.M.Ed.) and Flute Performance (M.M.) where she studied with Sharon Lebsack. While teaching across the southeastern United States and at Worth Abbey in West Sussex, England, she studied with internationally recognized soloists Sir James Galway, Paul Edmund Davies, and Wissam Boustany.

Theisen has performed regularly with the Mobile Symphony Orchestra, Meridian Symphony Orchestra, and the Sinfonia Gulf Coast. As a soloist with a large ensemble, she has performed Cimarosa’s Concerto in G, Doppler’s Fantasie Pastorale Hongroise, and Chaminade’s Concertino. Theisen won the state level of the Music Teacher’s National Association Young Artist Woodwind Competition in 2004 and proceeded to take honorable mention at the regional MTNA competition in Louisville, Kentucky.

Misty Theisen is a member of Duo Fujin, a professional flute and saxophone ensemble that has concertized across the United States. A tireless advocate of contemporary music, Theisen has given the world premiere of several compositions that have been commissioned by and dedicated to her. In 2015, she presented a lecture performance on Neil Anderson-Himmelspach’s Gonzo and the Velocipede (composed for Duo Fujin) at the Mid-South Flute Festival at the University of Alabama. From 2012 to 2014, Misty Theisen served as the Tau B Province Officer for Sigma Alpha Iota International Music Fraternity. In the western North Carolina area, Theisen performs on multiple woodwind instruments and piano for professional and educational musical theater productions.

Theisen also teaches band and orchestra for the North Buncombe school district in Weaverville, North Carolina. In addition to the flute studio and woodwind quintet at Mars Hill University, Theisen teaches elementary music methods and serves as the financial officer for the Lambda Beta chapter of Sigma Alpha Iota.

Listen to Prof. Theisen play both flute and piccolo with the MHU Wind Symphony in a performance of Rimsky-Korsakov’s famous Flight of the Bumblebee