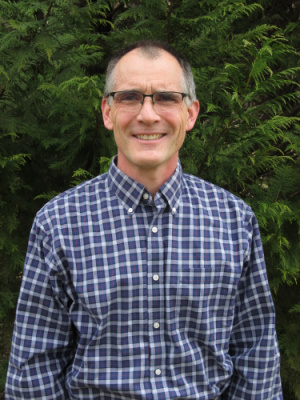 Stefen Howard is a 1989 graduate of Guilford College in Greensboro, N.C., where he majored in art and minored in geology. He is a native of Ocracoke Island on the Outer Banks of North Carolina. Following graduation, he founded and managed a retail craft business in his hometown. In 1994, he moved westward to pursue an advanced degree in computer science. In December of 1998, he earned his master’s degree from the University of Tennessee, Knoxville, and began teaching at Mars Hill University in January of 1999.

Stefen was instrumental in developing the computer science curriculum at Mars Hill and he currently serves as the coordinator of the program. He teaches courses on topics ranging from introductory programming and problem solving to computer organization and computer science theory. Because of his background in art, Stefen especially enjoys teaching Web design, multimedia, and computer animation.

Outside of the classroom, Stefen can be found shooting hoops with other faculty and staff members during the lunch hour, hitting balls on the tennis court, or playing his acoustic guitar, electric guitar, bass guitar, or some variation of a mountain dulcimer.