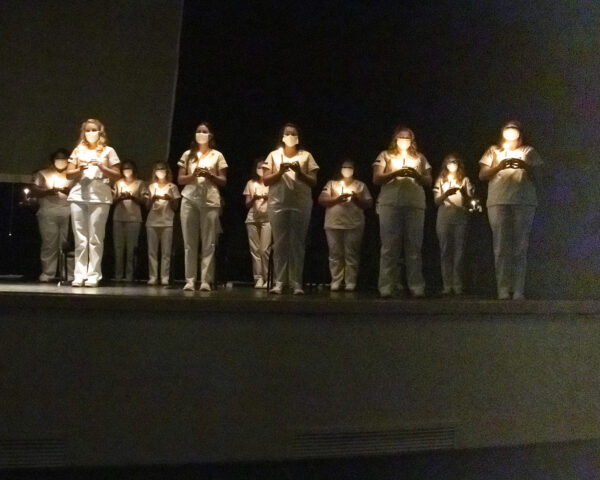 MHU’s Judge-McRae School of Nursing marked National Nurses Week (May 6-12) in an appropriate fashion on Friday — by holding the pinning ceremony for this year’s Bachelor of Science in Nursing (B.S.N.) graduates in Moore Auditorium.

The spring 2021 graduates of MHU’s pre-licensure B.S.N. program are:

Special speaker for the pinning ceremony was Michelle Gilley, Ph.D., an assistant professor in the integrated health sciences and biology programs at MHU. The ceremony included a Blessing of the Hands, during which Rev. Linda Judge-McRae and assistant chaplain Rev. Andrew Hoots anointed the new nurses’ hands with olive oil. Judge-McRae and her husband, Norman, provided fundamental vision and financial support to establish the Judge-McRae School of Nursing.

Graduating nurses received a pin which signifies their transition from the student role to the medical practice role. The tradition is said to have originated in the 1860s with Florence Nightingale, who is considered the founder of modern nursing. After receiving their pins, the nurses lit lamps and recited the Nightingale/Nursing Pledge, which is an adaptation of the Hippocratic Oath taken by physicians.