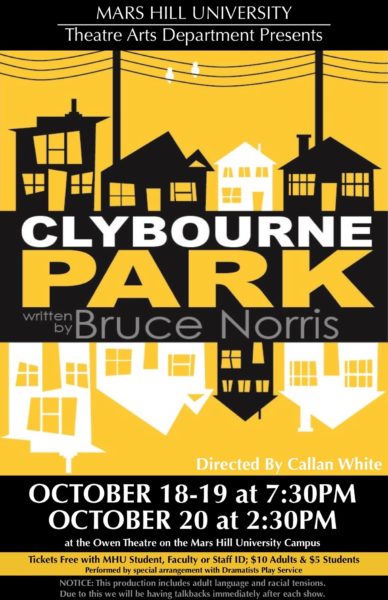 Mars Hill University Theatre Arts Department will stage “Clybourne Park,” October 18-20, 2019. The play, by Bruce Norris, is sure to instigate debate on social issues, past and present. Performances are at 7:30 p.m. on Friday through Saturday, October 18-19, with a 2:30 p.m. matinee on Sunday, October 20th. Also included in the performance schedule is a school matinee October 18th at 9:30 a.m. All performances are in the Owen Theatre on the campus of Mars Hill University.

Only one play in history has received the Pulitzer Prize for Drama, Broadway’s Tony Award for Best Play, and London’s Olivier Award for Best New Play. Securing the “Triple Crown” of theatre has made “Clybourne Park” one of the most acclaimed American plays in recent memory, earning accolades from many diverse critics. The Pulitzer Prize jury described it as “a powerful work whose memorable characters speak in witty and perceptive ways to America’s sometimes toxic struggles with race and class consciousness.”

Tackling the timely issues of race and real estate with biting humor, “Clybourne Park” covers subjects particularly relevant and important to society today. The play is Norris’ modern answer to Lorraine Hansberry’s “A Raisin in the Sun,” and takes place in the same fictional neighborhood the Younger family moves to at the end of that classic play.

The first act of “Clybourne Park” is set in 1959, where a white couple has unknowingly sold their home to a black family, causing an uproar in their all-white neighborhood. Act Two fast forwards 50 years to 2009 when a young white couple buys the same house with plans to rebuild and gentrify their piece of the predominantly black, but changing, neighborhood. Although taking place 50 years apart, both acts devolve from conversations rooted in political correctness to emotion fueled debates hilariously highlighting the way we talk, or don’t talk, about hot-button subjects.

Bruce Norris says, “’Clybourne Park’ is not just about racial conflict, but about clannishness and how we divide ourselves up into clans of people when our territory is threatened, because literally, that’s what happens in the play, is that there’s a territorial dispute over a piece of property.” “The award-winning ‘Clybourne Park’ is a play that will challenge our students and our audiences. It’s about relationships in the home and in the community and what threatens the tribal status quo,” states Director Callan White-Hinman. “As thoughtful as it is challenging, we believe the play will inspire invigorating discussions about change, opportunity and the future of our local and global neighborhoods. Mars Hill University Theatre Arts Department will host post-show discussions after every performance, moderated by the MHU Director of Diversity, Equity, & Inclusion and members of the cast.”

Tickets are $10 for adults, $5 for students with identification, free for Mars Hill University Students and Staff. For more information, contact the box office at (828) 689-1377 or purchase tickets online:

“Clybourne Park” is best enjoyed by adults due to its adult language and mature themes.

The next production from the Mars Hill University Theatre Arts Department will be a co-production with the Southern Appalachian Repertory Theatre of “Miracle in Bedford Falls,” a musical based on the classic holiday film, “It’s a Wonderful Life!” That show will run December 5-22, 2019.