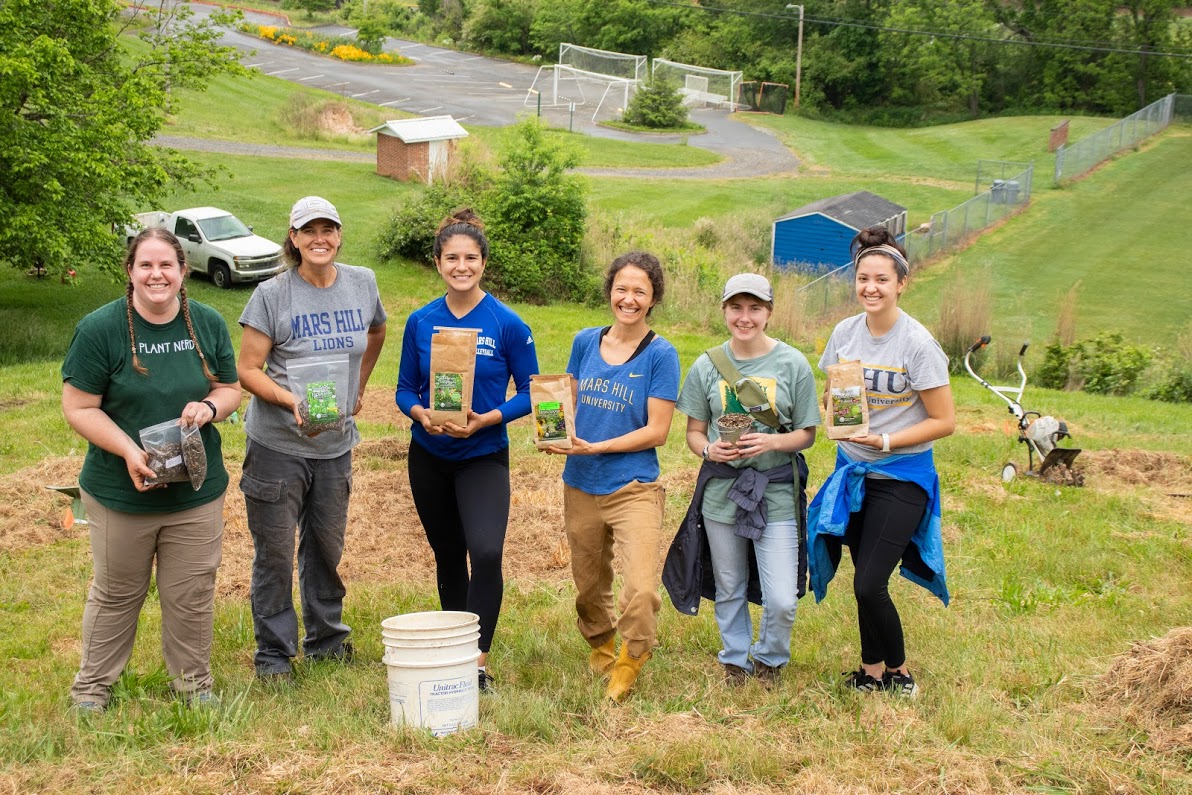 A prairie is growing on the Mars Hill University campus. On a hillside on the north side of campus, student Shaelyn Roberts and biology professor Nicole Soper Gorden, Ph.D., are bringing in native grasses and flowers to retake the land from the invasive and other non-native species which now cover it. The project began in the 2019-2020 academic year with several students growing native seedlings, but got derailed when the COVID-19 pandemic forced the university to finish the school year with remote learning.

Now Roberts is taking the student lead on the project for her senior seminar. The rising senior from Weaverville, North Carolina, is a biology major, with a concentration in field biology. Field biology has interested her since third grade, when she began attending summer camps at the Western North Carolina Nature Center, and she chose to attend Mars Hill University because it’s one of the few schools which offers a field biology program.

There are several reasons to prefer a native prairie to the existing non-native plants, according to Soper Gorden. Maintaining the area will be easier, as the native flora will need mowing only a couple of times per year, compared to the frequent mowing currently required. It’s also a good habitat for birds, reptiles, insects, and other pollinators. And, importantly for the university, it provides a living lab.

“We’re hoping to use it in the biology department as another type of site that we can come out and look at for ecology projects and things like that,” said Soper Gorden. “There are plenty of forest sites we can go to, but not as many native meadow areas.”

As they begin this stage of the project, Roberts and Soper Gorden want to determine the best method of preparing the area for seeding. They marked off nine rectangular plots and prepared them by covering three with black plastic and three with clear plastic, and burning existing vegetation on the remaining three. The plastic-covered plots sat for about three months, trapping heat and blocking light. They removed the six plastic covers and burned the other three plots in early June, then tilled the soil and planted a mixture of native grass and flower seeds.

They’ll observe the plots over the coming months to learn which give the plants the best start to get established, and then use that method of soil preparation as they plant the remaining area of the hillside. For her senior seminar project, Roberts is particularly interested in which of the prep methods might help prevent invasive species from coming back. After the initial investment in seeds, they plan for the remainder of the planting to be self-sustaining: using seeds harvested from the newly grown plants to start the next growth areas.

Soper Gorden says it usually takes about two or three years to establish a prairie, if the entire area is planted at once. Given the research nature of the early stages of this prairie project, she expects it will take a little longer to convert the entire hillside to prairie.

Besides the biological and academic benefits to the project, Soper Gorden says there also is an aesthetic benefit. “It’s just going to be pretty, and I like having pretty places on campus where people can go and relax and sit and enjoy things. I think prairies are underestimated, in terms of how pretty they are. People think they’re just grasses, but there are a lot of really nice wildflowers in here, too. Every season there’s a different color on the prairie.”