Take a walk down the halls of A.C. Reynolds Middle School and you will surely find Principal Stanley Wheless, Mars Hill class of 1996, interacting with the students and staff, and making sure the day gets off to a great start. He’s been the principal of Reynolds Middle since 2017, and says he loves his students and his staff, and he works hard to find creative ways to engage them each and every day.

Not only is Stanley the principal, he also is a bus driver. “It’s a win-win for me because it gets me out into the community and helps me get to know the students better,” says Stanley.

When asked what it has been like to manage his students and employees during the pandemic, Stanley says, “It’s nothing like anything I’ve ever experienced before. But if you’ve got to go through a pandemic, the people here at ACRMS are the best to do it with. They have been amazing. I am so blessed to be a part of this community.”

Stanley says the support from the Buncombe County Schools central office has been very helpful, with tools and training provided to help teachers and administrators navigate the choppy waters. “We take it day by day, and the only constant thing is change.” And, like most parents and students, Stanley hopes that widespread COVID-19 vaccinations will help calm fears, and allow things to get back to normal by next academic year.

Stanley is part of a family which is serving WNC well and making MHU very proud. His older brother, Patrick Crudup, helped Stanley settle in and learn his way around campus during his first year. They both were true student-athletes—excelling in sports and doing well in their classes. Stanley says his all-time favorite professor was Dr. Grainger Caudle in the business administration program. “He was down-to-earth, helpful and gracious.” 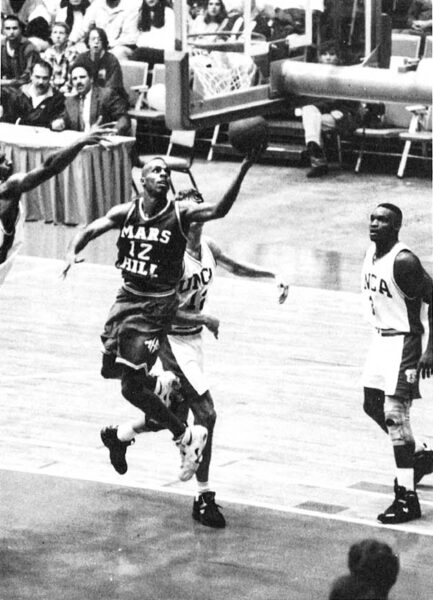 Stanley was recruited to Mars Hill College to play basketball for Lions head coach David Riggins, and was part of the team that won the South Atlantic Conference Championship in the 93-94 season. In his college career at The Hill, Stanley scored 1,026 points, pulled down 501 rebounds, and sank just under 50% of his field goal attempts over 108 career games.

“All the guys from basketball, football, soccer, etc., hung out together. And we were very close with the coaches. The friends I made during my time at MHC is what made Mars Hill special to me. I still talk with many of them today.”

In 1998, Stanley returned to MHC to fill the role of assistant basketball coach for the men’s team, and held that position until 2008. “I love looking back on the kids and their successes. Coaching basketball and being an administrator are very similar roles. They both involve managing people, and if you are good to them, they will be good to you. It’s all about the relationships,” he said.

Head football coach Tim Clifton recalls Stanley’s days of coaching basketball at MHC, and says, “Stanley was a successful coach because he knew how to communicate with the players, and how to relate with them on a deeper level. That is why Stanley is successful in everything he does.”

After leaving Mars Hill, Stanley began teaching business and coaching at the high school level. He did that for about three years, but felt the desire to do more. And then one day, his principal asked if he would have interest in becoming a school administrator. That simple question launched his administrative career in the fall of 2011. Between 2011 and 2017, he served as assistant principal at a couple of middle schools in WNC. At the same time, he was earning a master’s degree in executive leadership from Gardner-Webb University. And his hard work paid off, as Stanley landed the role as principal at A.C. Reynolds Middle School in 2017. And that’s where he has thrived.

Stanley is still coaching today—just in a different way. The age group and topic are slightly different, but he’s okay with that. When asked about his hopes for the future, he quickly replied, “I want to remain the principal here at the middle school. I love what I do; I love the kids; and the BCS system has been so good to me. I can’t think of a better place to work.”