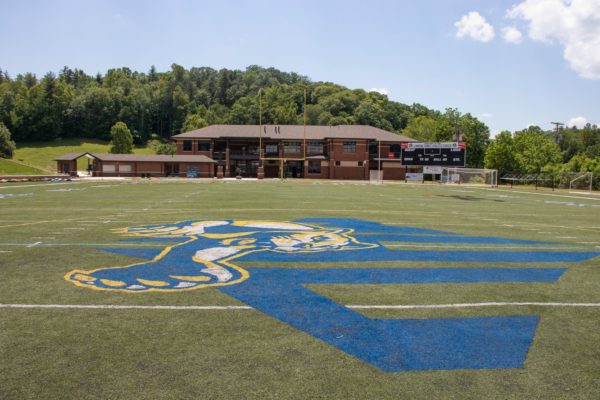 Mars Hill University will dedicate a major new addition to its athletics facilities on Friday, September 27, 2019. The Jo Ellen Ammons Field House opened for the fall sports season, and university officials will hold a dedication ceremony beginning at 5 p.m. The Mountain Lion Marching Band, Cosmo the mascot, and the university’s spirit teams will join student-athletes, coaches, and dignitaries for the event on the back patio of the facility. A reception will follow, along with self-guided tours. Rain location is the Cappiello Athletic Training Facility, on the first floor of the field house.

The 14,500-square-foot field house sits at the south end of the main athletic stadium, at the corner of NC 213 and Athletic Street. It supports all football operations, women’s soccer, and men’s and women’s tennis, with coaches’ offices, weight room, and locker rooms. The field house also includes an expanded athletic training area for all sports. Future expansion will provide space for men’s and women’s lacrosse and men’s soccer.

The field house is named in memory of Jo Ellen Ammons, a longtime supporter of Mars Hill University and its student-athletes, thanks to a generous lead gift from her husband, Jud, a former university trustee. The Ammonses also are the benefactors and namesakes of the Jud and Jo Ellen Ammons Family Athletic Center, which encompasses the entire stadium facility, and was dedicated in 2007.

The field house addresses a longtime space issue for the university’s athletics program. For decades most sports were housed in Chambers Gymnasium. But that facility was built in the late 1960s, when Mars Hill fielded only eight intercollegiate teams. Now there are 22. As new sports were added, the available space became crowded, eventually forcing the university to situate coaches and other athletics staff in buildings across campus, far from their training, practice, and playing facilities.