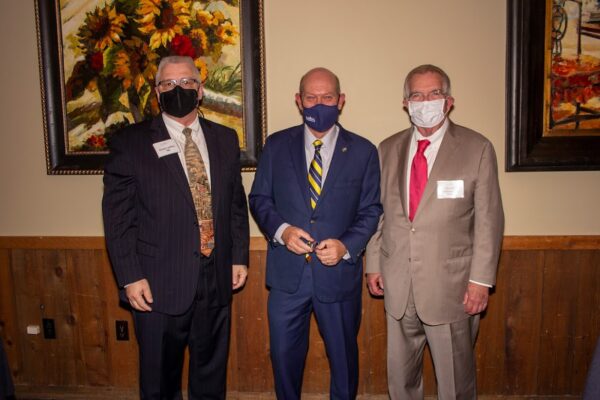 Charlie Trammell of Memphis, Tennessee, was recognized as Philanthropist of the Year. He has been a major catalyst in Mars Hill moving forward with the “Together We Rise” campaign to build a new campus center to help elevate the student experience. Trammell also has responded to tangible opportunities and needs across the campus, providing funding for summer student work opportunities, air conditioning for Huffman Residence Hall, capital campaign marketing materials, refurbished athletics locker rooms, and seed money to begin the new acrobatics and tumbling program, among others. A university trustee and graduate of the class of 1959, Trammell is founder and president of Retirement Companies of America.

Other benefactors recognized at Thursday’s event were:

The university also recognized Stuart Jolley of Mars Hill as Alumnus of the Year. Jolley is in his 40th year as the public address announcer for Mars Hill athletics. He began announcing women’s basketball and volleyball games in 1982 and added football and men’s basketball before he graduated. Jolley earned his bachelor’s degree in history from Mars Hill in 1986 and a master’s degree in education from Western Carolina University in 1988. He spent his working career as a teacher and administrator in Yancey County Schools, and twice was named Teacher of the Year for Mountain Heritage High School. He is an elected member of the Town of Mars Hill’s board of aldermen. Jolley is president of Mars Hill University’s Lions Athletic Club, which has raised more than a half-million dollars in its first two years. He was elected to the university’s athletics Hall of Fame in 2012.