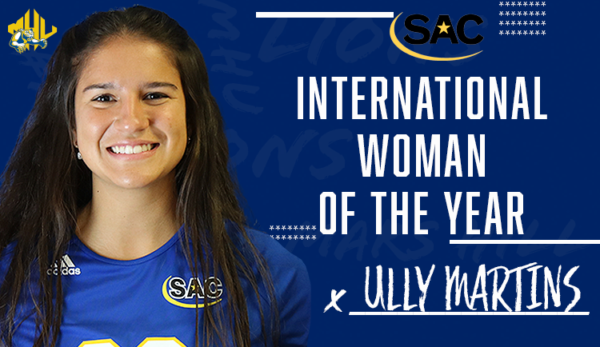 Ully Martins, a senior on the Mars Hill University volleyball team, has been named the 2021 South Atlantic Conference International Woman of the Year. She now is in the running for the NCAA Woman of the Year honor.

Martins, a recent graduate and defensive specialist, has been a member of the women’s volleyball program for four years and earned her bachelor’s degree in computer science. She earned recognition on the Dean’s List all four years and was named to the SAC Commissioner’s Honor Roll her first three years. She was named to SAC First Team All-Conference in both the pre- and post-season in the 2021 spring season while also helping lead her team to its fourth straight SAC Tournament appearance. She was selected as the conference’s Scholar Athlete of the Year for volleyball.

A native of Rio de Janeiro, Brazil, Martins is active on and off the court in the Mars Hill community and in her home city. She has organized canned food drives with the Mars Hill Student Athlete Advisory Committee and helped host Halloween Trunk-or-Treat opportunities for local children, and spent summers coaching young children in Brazil. She was an instrumental part in the “Dig Pink” nights at which the volleyball team raises money for breast cancer research. Martins also volunteered to help other Mars Hill students improve their math skills by tutoring them weekly.

Established in 1991, the NCAA Woman of the Year award is rooted in Title IX and recognizes graduating female college athletes who have exhausted their NCAA eligibility and distinguished themselves in academics, athletics, service and leadership throughout their collegiate careers.

Martins and Queens University volleyball player Logan Witt will move forward as the South Atlantic Conference’s nominees for the NCAA Woman of the Year Award. The field will be narrowed to the Top 30–ten from each of the NCAA’s three divisions. From the Top 30, each division will have three honorees selected as finalists, and the winner will be announced in the fall.