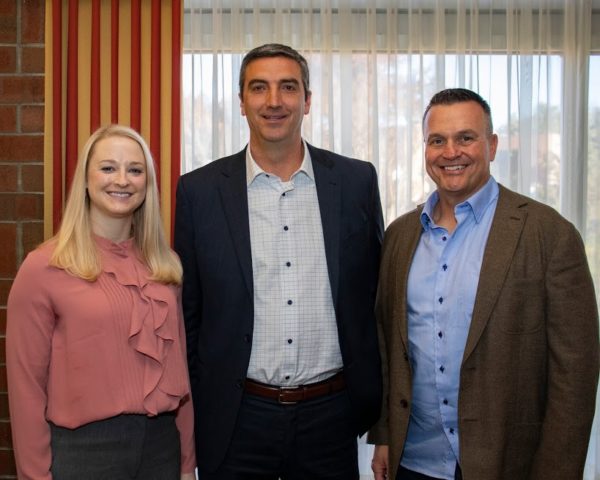 Mars Hill University celebrated the 2019 Hall of Fame class on Saturday, November 16 at halftime of the football game versus Wingate.

Abby DeBusk was a member of the women’s basketball team from 2003-2007.  During her time with the Lions, DeBusk was named First Team All-SAC, Second Team All-Region in 2007, and is second all-time in the SAC for three-point field goal percentage for a single season (.493; 2006-07).

Upon graduation, DeBusk enrolled at Lincoln Memorial University-DCOM Medical School from 2007-2011.  She later attended University of Kentucky Family Medicine for her residency and the University of Cincinnati Sports Medicine Fellowship.

Currently, DeBusk is employed by the University of Kentucky Orthopedic & Sports Medicine department in Bowling Green, Kentucky and is one of the team physicians for Western Kentucky University.

Mike Houston was a member of the Mars Hill football team, playing tight end from 1990-1994.

During his time on the Hill, Houston made Dean’s List multiple semesters and during his final two years at Mars Hill, served as the President of the Fellowship of Christian Athletes.  Houston graduated with a bachelor’s in biology.

Upon graduation, Houston entered the coaching ranks and has coached at both the high school and collegiate levels.  He served as head coach at T.C. Roberson, where he accumulated a 42-18 record during his time.  In 2004, Houston led the team to a 13-1 record and led them to their first conference championship in school history.  He was named a two-time Coach of the Year.

During his time with the Bears, Houston was named SAC Coach of the Year each season and was the Don Hansen Super Region II Coach of the Year in 2013.  Houston moved on to become the head coach of The Citadel for two seasons winning a share of the Southern Conference title in 2015.

Houston then went on to become head coach for James Madison for three seasons, leading the program to a 37-6 record and a National Championship in 2016.

Miles scored the first goal in MHU history and was the first player to record 100 points in a career.  In the men’s lacrosse record books, Miles ranks ninth all-time in goals (70) and points (104), while sitting in tenth place in career assists (34).

Miles served as team captain and was named team MVP in 2000 and 2001 while also being named an All-Deep South Conference selection. Miles finished sixth in the NCAA D2 rankings in goals during the 2000 season. He finished in the top five in the country for ground balls in a season and set the school record (110) during the 2000 season. Miles graduated from Mars Hill with a bachelor’s degree in psychology and later attended Michigan State to obtain his master’s degree.  Miles also received a graduate certificate from Vanderbilt.

Upon graduation, Miles was the Assistant Headmaster and head boy’s lacrosse coach at Christ School, where he compiled a 213-87 record in 18 seasons, including winning three consecutive state championships in 2017, 2018, and 2019. Miles was selected the North Carolina Coach of the Year in 2006 and 2017. His teams appeared in the NCISAA playoffs in 14 consecutive seasons.

Currently, Miles is the Head of School at Rabun Gap-Nacoochee School.