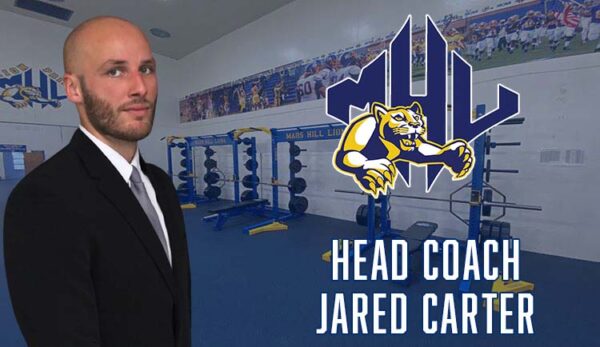 Mars Hill University will add Olympic Weightlifting as a club sport in the fall of 2022 and has announced Jared Carter as the head coach.

Carter was originally hired in the fall of 2021 to be the Director of Strength and Conditioning for all 22 varsity sports offered at Mars Hill.

“We’re extremely excited to offer Weightlifting as a new club team at Mars Hill University come fall 2022,” Carter said. “The sport is still somewhat rare at the collegiate level, which has allowed us the opportunity of providing a unique experience for existing and potential students that they wouldn’t have elsewhere.”

A Club Sport is defined as a student organization designed to serve student interests in different sports at the Non-NCAA level. These sports can be competitive or recreational and clubs compete with other clubs, organizations, colleges, and universities. The Lions are located between two of the top teams in the nation, East Tennessee State and Lenoir-Rhyne.  Competitions would be between these local and other regional teams.

Weightlifting has been contested since the first Olympic games held in 1896.  During competition, the athletes will compete in two events: the snatch and the clean and jerk.

The snatch sees the barbell centered horizontally on the competition platform to begin.  The athlete will then stand behind the bar, facing forward and with wide grips, pull the bar off the ground and fully extend both arms overhead in one single movement while either splitting or bending at the legs.

In the clean and jerk, the bar will be in the same position as in the snatch.  The athlete, with narrow grips on the barbell, will pull the bar up in a single movement up to their clavicles, chest, or fully bent arms while either splitting or bent at the legs.  They then will either bend or dip at the knees and propel the bar over their head with full arm extension and hold the position to be credited with a score.

Carter added, “We have been fortunate to partner as an affiliate of USA Weightlifting and look forward to competing within their organization this fall.”