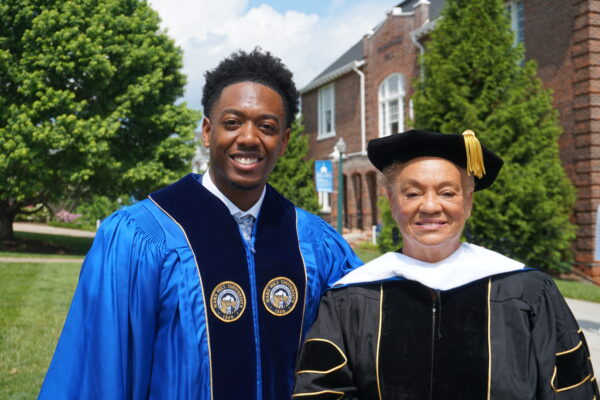 Mars Hill University conferred 168 degrees during its spring commencement ceremony on May 21, 2022. In addition to the bachelor’s and master’s degrees awarded, the university also presented an honorary Doctor of Humane Letters degree to Oralene Anderson Graves Simmons, who broke the color barrier at Mars Hill in the early 1960s.

The university presented the diploma of Daniel Hudgins to his parents. Hudgins was a nursing major who died from cancer during his senior year.

Oralene Anderson Graves Simmons is a Mars Hill native who has become a well known figure in the Asheville area for her decades of work in the community and in the civil rights arena. Among many other contributions, she founded the Martin Luther King Jr. Prayer Breakfast in Asheville; was executive director of the YMI Cultural Center; and served as the cultural arts supervisor for the City of Asheville. Simmons, who attended Mars Hill from 1961-1963, was the first African American student to enroll at the institution. Board of trustees chairman Mike Kelly, a 1982 Mars Hill graduate and the university’s first African American to chair the trustee board, participated in the hooding ceremony.

Keynote speaker for the commencement ceremony was Preston Blakely, mayor of Fletcher, North Carolina, and grandson of Simmons. His message encouraged the graduates to be the leaders of today and tomorrow. “It is the feeling of excitement, anxiousness, and eagerness that I experienced when I was elected,” he said. “You take all those feelings, you build courage, and use that courage, and you take that leap of faith. And after you make that leap of faith, you make a difference. And when you make a difference, you become a leader.”

Blakely pointed to two great leaders in his own life: his grandmothers, Simmons and the late Patricia Blakely McCurry, who was the first female African American bus driver for the city of Asheville. “As I talked about my grandmothers, it is evident that leadership shows up differently in different people,” he said. “So I’m telling each and every one of you to do what you feel is important. So become the nurse, become the teacher, become the community organizer, be the activist, be the next youngest mayor in your home state-be what you want to be. Use the feelings that you’re experiencing right now. Take them outside this auditorium and use that courage, take that leap of faith, make the difference however you see fit. Continue being the leaders that you all have already proven you can be.”