The Folklore of Appalachian Ballads 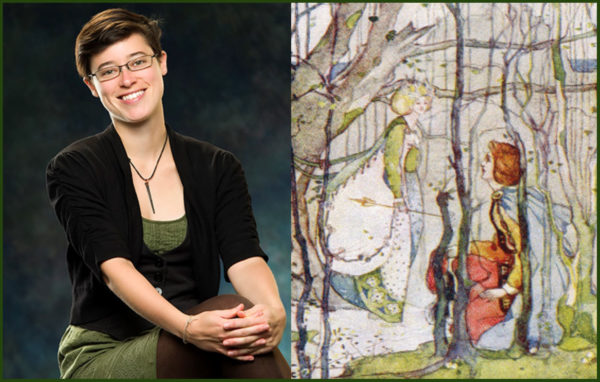 In this presentation, Ms. Lynch-Thomason will explore the folklore embedded in several Appalachian ballads. The story-songs brought to Appalachia by Scottish, Iris h, and English colonizers in the 18th and 19th centuries have much to reveal about historic beliefs and traditions from the North Atlantic region. Ms. Lynch-Thomason will sing several ballads and discuss what they can tell modern listeners about animal lore, magic lore, and spiritual beliefs that date back to the middle-ages and even pre-Christian Europe. She will also demonstrate how balladry has moved through literary and oral forms by tracing the history of the “Thomas Rhymer” ballad, a story with 13th century origins that has wound its way through medieval romances, poetic reinventions, and song traditions for nearly 700 years.

Ms. Lynch-Thomason is a ballad singer, folklorist, documentarian, and illustrator from Asheville, NC. She holds an MA in Appalachian Studies, a Certificate in Documentary Studies, and currently serves as the Assistant Director of the Swannanoa Valley Museum and History Center in Black Mountain, NC. Her passion for traditional music, people’s struggles and Appalachian traditions calls her to perform, teach and produce media that tell the stories and songs of the social history of the mountain south. Combining music, narratives and multimedia, Saro delivers memorable and moving performances that bring people’s history, song and culture to life!”

Before the talk, be sure to join artist Julyan Davis at MHU’s Weizenblatt Gallery to view and discuss his museum show of paintings based on Appalachian ballads. Davis will be there from 2:30 until 3:25 PM. This event will run from 3:30-4:45 PM.