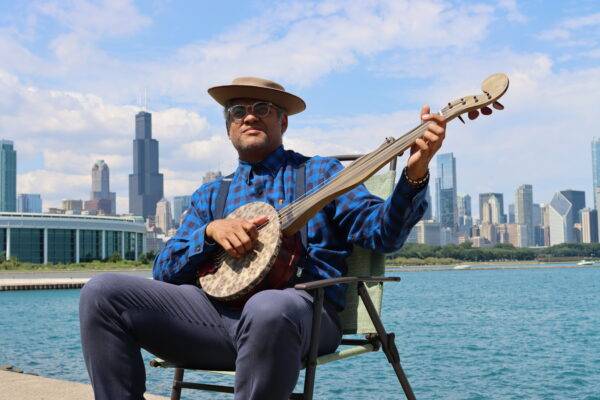 We are excited to welcome Grammy Award-winner Dom Flemons to Mars Hill University!

Flemons (also a two-time Emmy nominee and 2020 US Artists Fellow), is a roots musician famously known as The American Songster® since his repertoire covers over one hundred years of American roots music. He is a songwriter, multi-instrumentalist, music scholar, historian, actor, slam poet, record collector, and WSM radio producer, and is considered an expert player on the banjo, guitar, harmonica, jug, percussion, quills, fife and rhythm bones.

Flemons has performed all over the world, and has collaborated with many musicians, including Tyler Childers, Fantastic Negrito, and Rhiannon Giddens and the Carolina Chocolate Drops. His solo albums include Prospect Hill: “The American Songster Omnibus (Omnivore Recordings 2020) and Dom Flemons Presents Black Cowboys (Smithsonian Folkways Recordings 2018), which is part of the African American Legacy Recordings series, co-produced with the Smithsonian National Museum of African American History and Culture in Washington, D.C.

In the spring of 2022, Flemons made his debut as a creator, host, and producer on Nashville’s country music radio station 650 AM WSM, where he released season three of the American Songster Radio Show. He was awarded a degree as a Doctor of Humane Letters from his alma mater Northern Arizona University and was the commencement speaker at the graduation ceremony for the Class of 2022. In 2020, Flemons was also selected for the prestigious United States Artists Fellowship Award for the Traditional Arts category which was generously supported by The Andrew W. Mellon Foundation.

This concert is made possible by a generous grant from the Madison County Tourism Development Authority. Tickets are on sale here.

Consider also joining Flemons for a 5pm screening of the short film, Night Music, which he produced.

The Ramsey Center is a proud site on the Blue Ridge Music Trails of North Carolina.