An Evening with Jake Blount and Nic Gareiss 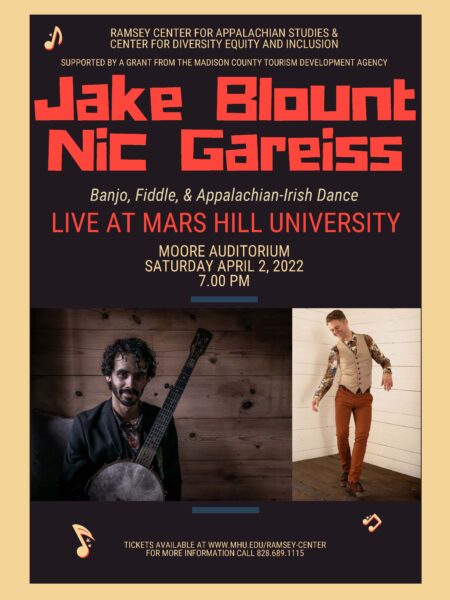 Jake Blount is an award-winning banjoist, fiddler, singer and ethnomusicologist. He is the 2020 recipient of the Steve Martin Banjo Prize, and a two-time winner and many-time finalist at Clifftop. Blount specializes in the music of Black communities in the southeastern United States, and in the regional style of the Finger Lakes, and foregrounds the experiences of queer people and people of color in his work. His first full-length solo album, Spider Tales (Free Dirt Records & Service Co.) debuted at #2 on the Billboard Bluegrass Chart, received positive coverage from NPR, Rolling Stone, and Billboard among others, and earned five out of five stars as The Guardian’s Folk Album of the Month.

One of Dance Magazine’s “25 to Watch,” Nic Gareiss is swiftly becoming recognized as a singular voice in traditional dance. Informed by 25 years of ethnographic study and performance of many world dance practices, Gareiss’ work draws from percussive dance traditions to weave together a technique facilitating his love of improvisation and traditional clog and step dance footwork vocabulary. He has concertized in sixteen countries with many of the luminaries of traditional music, including Alasdair Fraser, Bruce Molsky, and the Chieftains. He has performed at London’s Barbican Centre, the Irish National Concert Hall, the Munich Philharmonic, and the Kennedy Center.

This event is a co-production of the Ramsey Center and the Center for Diversity, Equity and Inclusion, and is supported by a generous grant from the Madison County Tourism Development Authority.

Mars Hill University students get in free with student ID. For all others, tickets are available here.