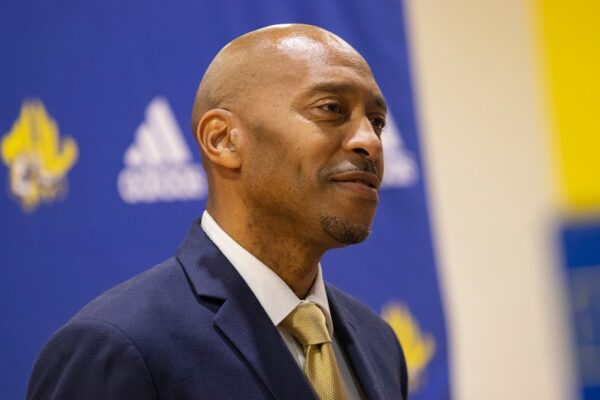 “I’m grateful to President Floyd, Rick Baker, and the rest of the selection committee for entrusting me to lead this program,” Davis stated.  “I am proud and honored to be the new head coach at Mars Hill University.”

Davis has spent the last four years as the Head Varsity Boys Basketball Coach, with the last two also as the Athletic Director at York Preparatory Academy in Rock Hill, South Carolina.  In addition to his coaching duties, he developed and organized fundraising events for both the girls and boys junior varsity and varsity programs.  He implemented offensive and defensive systems, edited and prepared game film, as well as evaluate players’ basketball and academic performances.

Prior to joining York Preparatory, Davis served as the Director of Operations for Men’s Basketball at James Madison University during the 2016-17 season.  He was responsible for all travel plans and the logistical operations of the travelling party, ordered, distributed, and collected all equipment, as well as coordinated fundraising events and activities.  He coordinated all aspects of prospective athletes’ official visits, recruiting weekends, coaches’ recruiting travel, and overall recruiting coordination while also being responsible for the creation and management of the Men’s Basketball Operations Budget.

In the 2015-16 season, Davis spent a year in the South Atlantic Conference as an Assistant Coach with Newberry.  It was his first coaching job at the collegiate level.  He coached high school basketball in 2011 with Lewisville High School as the Head Boys Varsity Coach and was there for two years before taking the same position for two years at Northwestern High School in Rock Hill, beginning in 2013.  Before joining Northwestern, he was named South Carolina Coach of the Year after leading Lewisville to a South Carolina Class 1-A State Championship. He began his coaching career in 2003 at Highland School of Technology in Gastonia, North Carolina and served as the Assistant Boys Varsity Coach up until 2009.

“We are extremely excited to name Larry Davis as our new Head Men’s Basketball Coach,” Director of Athletics Rick Baker said. “His experience as a standout collegiate player combined with his coaching experience make him a great addition to our athletic family. The success he has enjoyed as a player and a coach, along with his skill in recruiting, teaching and coaching the game will benefit our program immensely.

“We conducted an extensive search and a number of superb candidates were interviewed throughout the process and Coach Davis rose to the top,” stated Baker.

Davis was a standout high school and collegiate player, being named South Carolina’s “Mr. Basketball” and was the state’s Player of the Year in 1991.  He won Denmark-Olar High School’s State and National Scoring titles during the 1990-91 season, averaging 44.7 points per game and was a McDonald’s All-American Nominee as well as the first State of South Carolina Dean Smith signee in 1991.

In 1993, he was a member of the North Carolina Championship Team.  He later transferred to the University of South Carolina and was their leading scorer during the 1995-96 season.  In 1997, the Gamecocks won the SEC Championship and were ranked No. 4 in the country, earning an NCAA Tournament bid.  At the end of the season, Davis was named an AP First Team All-SEC selection as well as an AP Second-Team All-American, Basketball Times Third-Team All-American.  He graduated from South Carolina with 1,068 points, second most scored at the university in a career.

Davis graduated in 1997 with a Bachelor of Science in Liberal Arts in 1997. Davis spent two years as an NBA Summer League Athlete in 2001-03 and in 2006, was honored as a University of South Carolina Legend.  He was later named to their Hall of Fame in 2017.

Davis and his wife, Nina, have four children: Kory, Kendall, Taylor, and David.

Davis added, “I am eager to get started and build an exciting program that the faculty and staff, administration, alumni, and the community will come support and be proud of.”